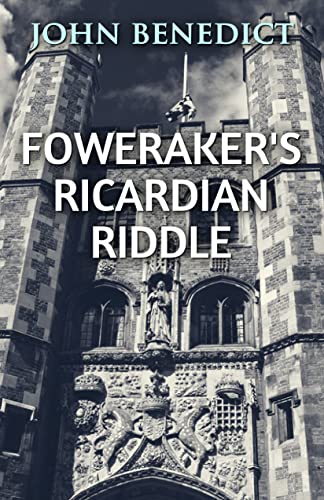 Pre-World War II Cambridge. The elderly Master of St. John’s, mediaevalist Professor Morecote, has been murdered - stabbed in the back in his college rooms.

Who murdered him and why? Was it the American students who feared being sent down for night-climbing? Or could it be a resentful colleague? Alternatively, was it connected with the discovery of artefacts - now missing - relating to the origins of the college and to its founder, Lady Margaret Beaufort, mother of Henry VII?

These artifacts alone would be almost priceless, but amongst them was a document, possibly written by Sir John Buck, historian and Master of the Revels in the Jacobean period. That document blamed Margaret Beaufort, and not Richard III, for the disappearance of the Princes in the Tower. This could, in the wrong hands, be political dynamite.

Scotland Yard’s Chief Inspector Foweraker and his team must determine the guilty parties and join up the loose ends, both current and historical.